It’s a gender neutral, animal/circus themed nursery for your viewing pleasure (finally:)). Sometimes you pitch your baby’s bedroom for press and it ends up shot for a magazine, that then ends up folding soon after, and then it gets stuck in magazine limbo for 2 years. But it’s published now, in Parents Magazine, so I can finally blog about it! Charlie was 6 months old here and was a red-head, apparently. I miss that baby so much it hurts. If an anti-aging drug really existed I don’t know who I would want to have it more – him or me. My deepening crows feet can bum me out, but if I could just stop him from aging one more day I’d shove that pill down his little throat so fast (besides, his smile lines are looking a bit ‘four year old’ these days…).

When we bought the house I was 8 months pregnant and it was pretty disgusting (the house, not being pregnant). This room had been used as the ‘cat room’ by the previous owners meaning that it was where they put the litter box, and anyone who has ever had a cat knows that while we cat owners do our best to keep them neat and tidy, they rarely are. Not exactly a newborn haven. 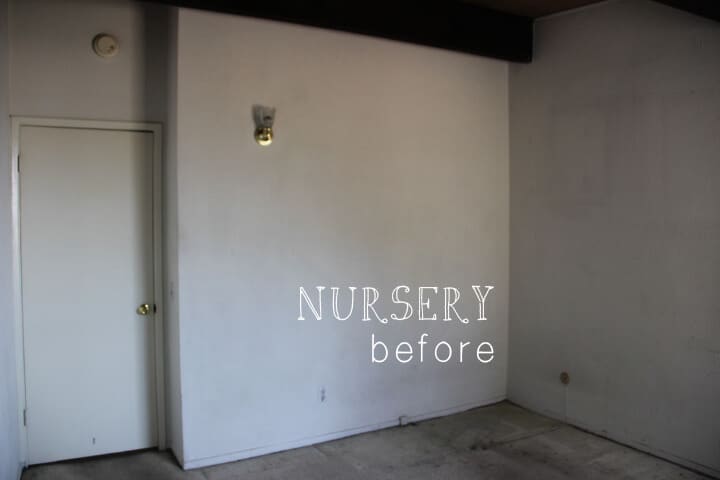 We stripped the carpet, put new flooring down, painted the brown painted beams white and primed the walls. It was all cosmetic and within a few weeks looked wildly better. 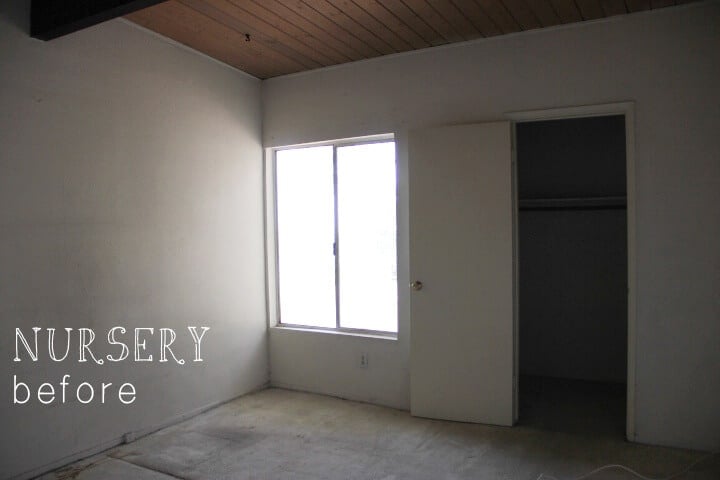 It’s a bit weird to document this almost 2 years later as I’m sure I’m forgetting so much, but here it goes: We wanted a gender neutral nursery that made us just as happy to hang out in as it did him. Every kid loves animals (we do, too) so we jumped on that theme pretty easily. Our color palette was a lot of white with big pops of almost any color. It was all inspired by that wallpaper that I had been dying to use for years and years. It is happiness-inducing paper – and I’m pleased to tell you that 2 years later I love it just as much. 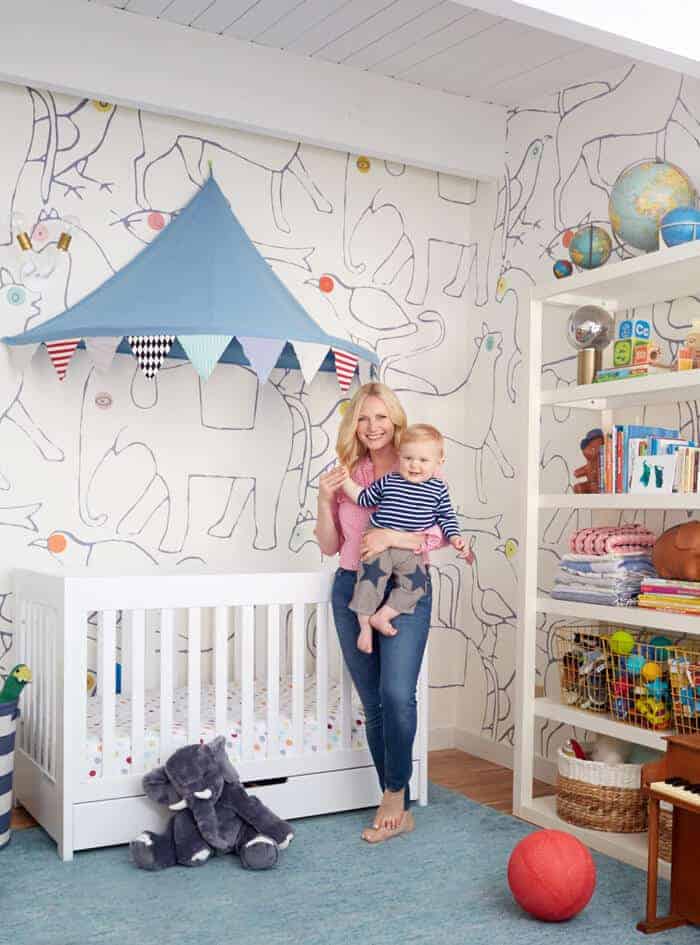 That canopy over the crib came from Ikea but then we customized by changing out the hanging triangles on it (for the Sip ‘n See). We actually have two more of them that are in the office that I’m happy to give to a couple of people in LA who are willing to come pick them up as we don’t need three of them. It’s a cheap, easy crowd pleaser. Like jello shots. 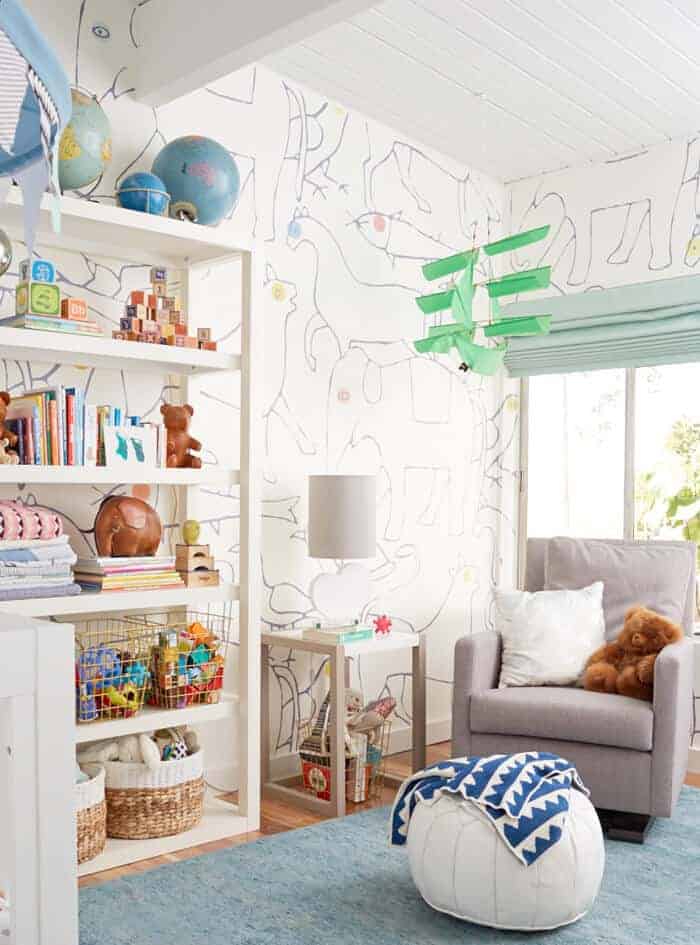 Charlie’s room is one of the only rooms (if not the only room) that hasn’t changed since I designed it – probably because it was actually designed and not just thrown together. It’s amazing how that makes a difference. The shelving changed a bit because he doesn’t really play in here anymore (he plays in the family room). We read a ton in here so the bottom two shelves are all books now so he can pick them out himself. The globes are still there, the ship kite is hanging tight and all the bins and baskets are still there – just full of some older toys that we constantly forget about. 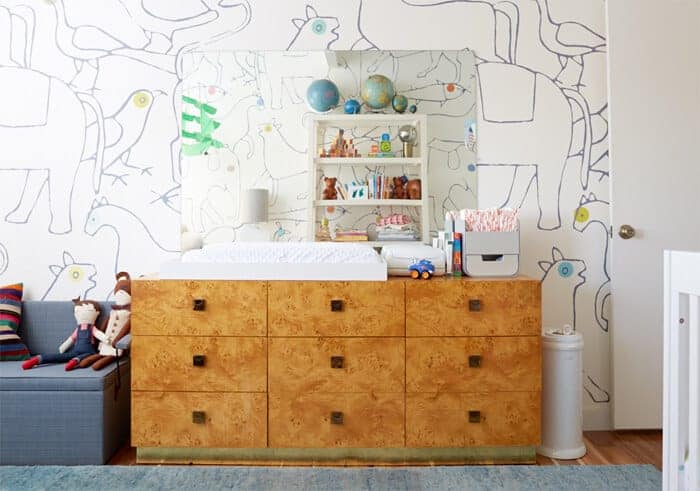 You know how in most magazines there are no diapers or ointments or diaper pails? Well there is in this one, which as a mom I LOVE seeing (as a stylist, less-so). Someday I’ll potty train that kid and not have to have that whole changing station (again … some day…). The changing table is a vintage dresser with a changing tray on top. We decided to do pretty much the same thing in the new nursery, too – and yes, those wood tops are strangely expensive (at least $80) so if you know someone handy in your life I suggest you start buttering them up to make you one. 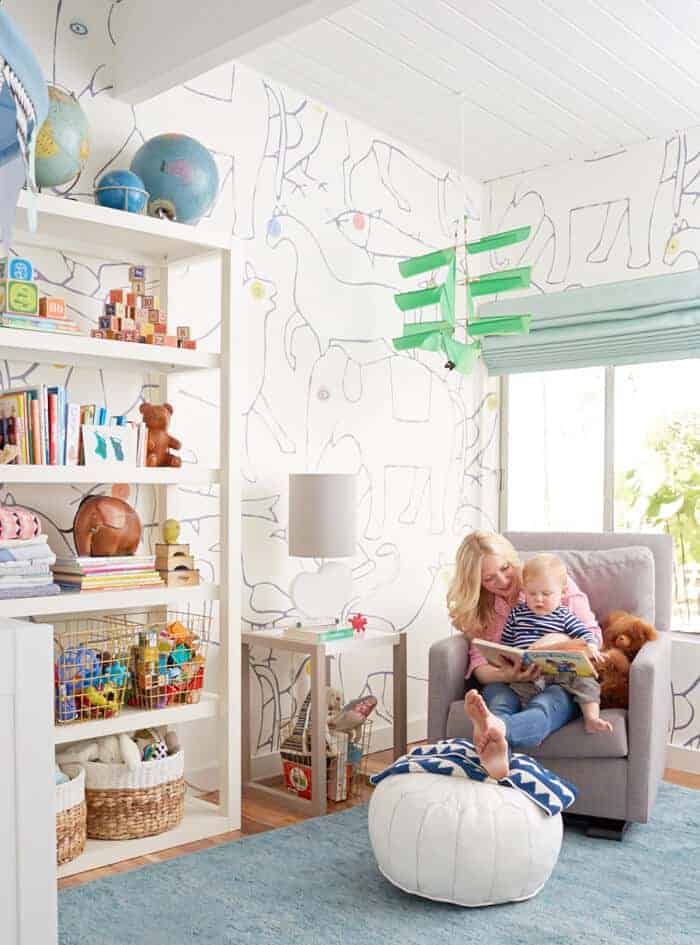 Man, seeing him this old makes me want another baby sooo bad. Thank god I’m about to have one…next week 🙂 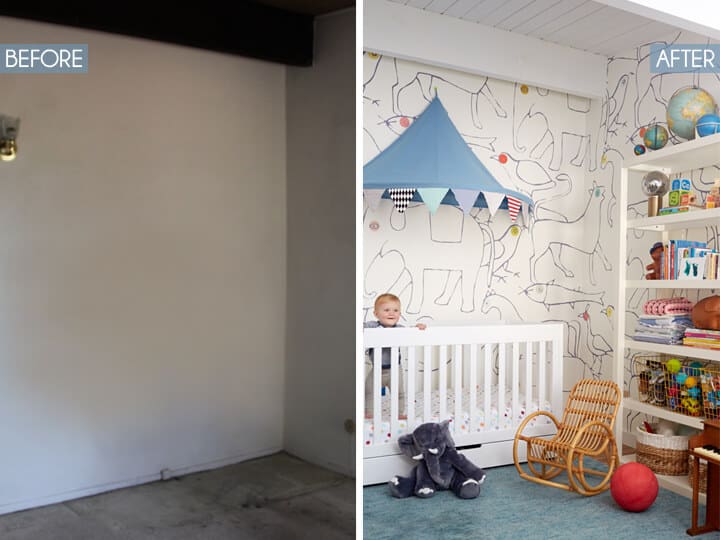 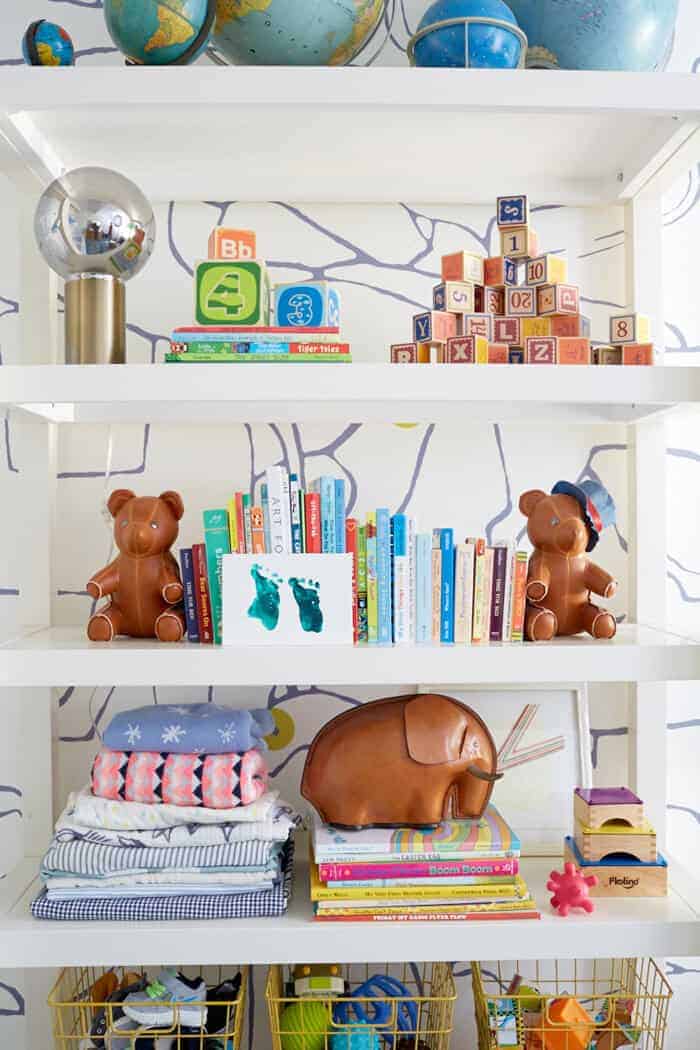 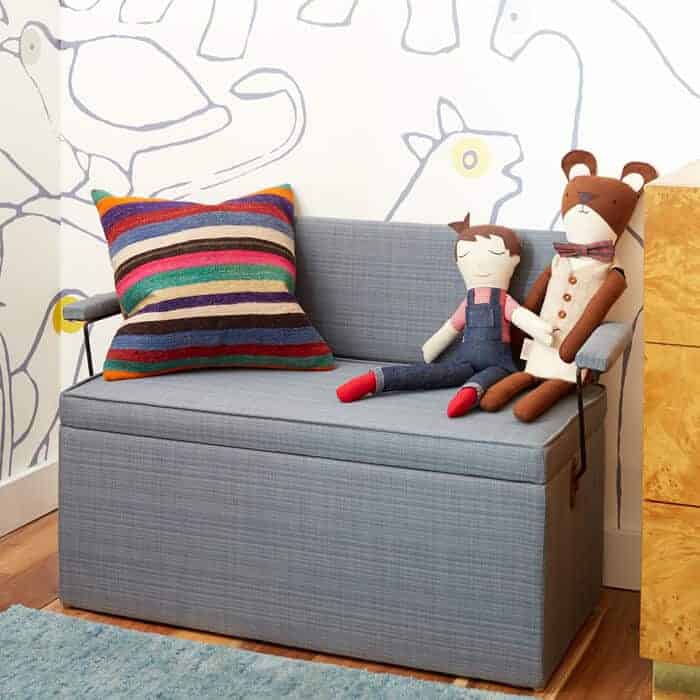 The whole tour was in the September issue of Parents Magazine. Thanks, for the feature guys. I saw it in the Doctors office every time I went, which is always VERY fun. 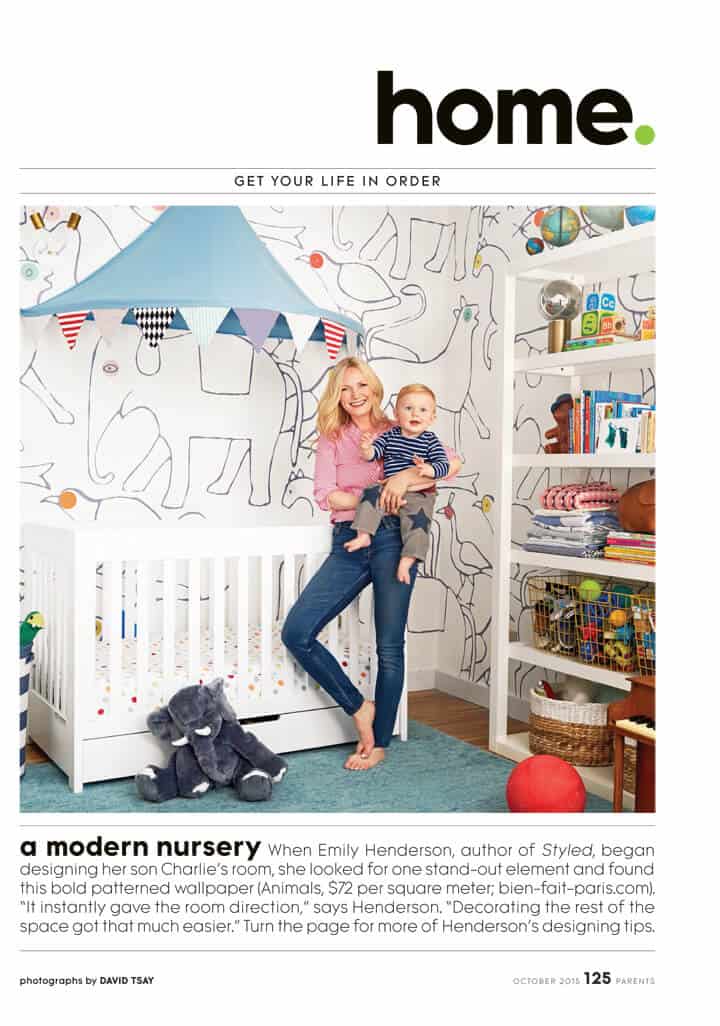 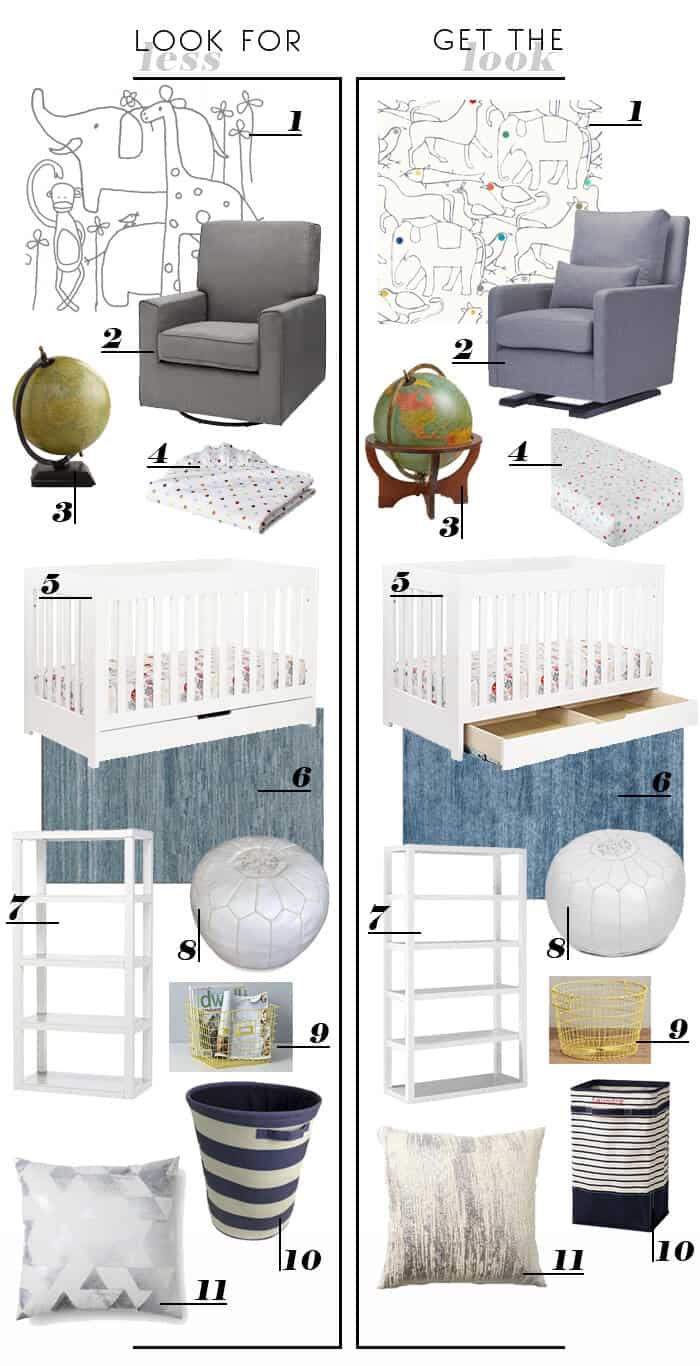 Get the Look for Less: 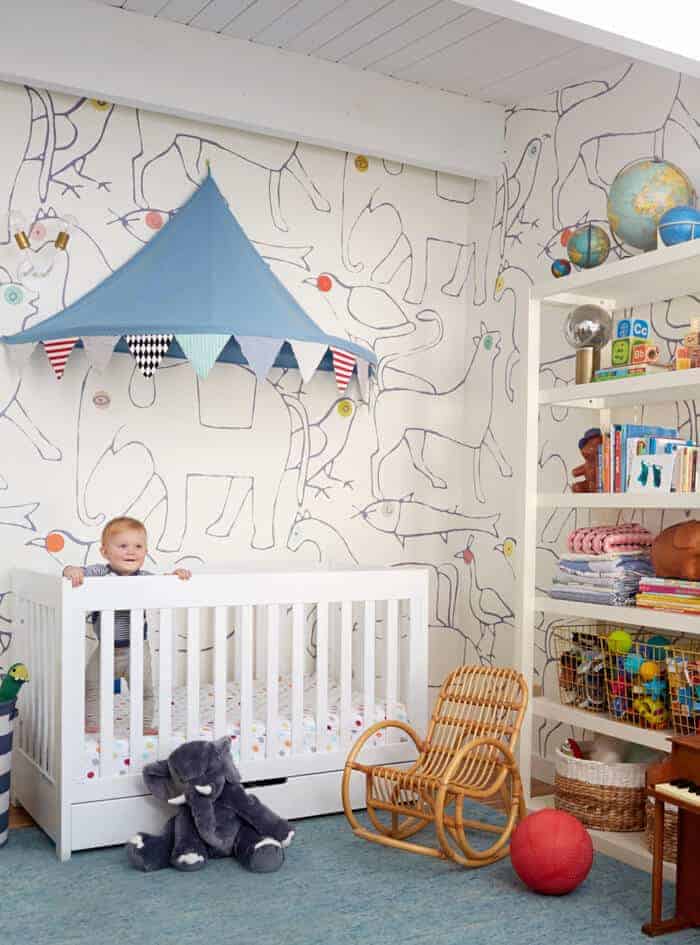 I know its not a full docu-story like I usually do per room, so please leave a comment with any questions and I’ll try to answer them. Most things that are still available are credited, but many either aren’t available or were vintage anyway.

Love this room—thanks so much for sharing!

This gave me goose bumps! NEXT WEEK!!!???? WOW that is so exciting!!! Sending all my calm happy healthy thoughts your way. This room is perfectly perfect – of course….I would expect nothing less. I love how you keep it so real – diaper pail, diapers, wipe warmer, ointments please don’t ever ever change. XO

My kids’ rooms are the only rooms in my house that are “done.” It’s funny how that works!

I am so in love with that wallpaper. Pin! Thank you for putting the spend more and spend less options too! Can’t wait to see the nursery for the little girl baby too.

Would also love to see a link to that throw on the pouf or something similar.

We have that same crib, in brown! Its great as a toddler bed too. Although my daughter pretty much ate the entire top rail when she was teething.

It is absolutely perfect! I’m in love with the wallpaper too! So unique, love how you meshed in form and functions so amazingly together Emily!!!!! I I think my nursery kinda follows along your design vibe, if you have time, please check it out … http://buhayatbahay.blogspot.com/2015/05/orc-week-6-sophias-safari-glam-nursery.html

I would love to know what you think!!!! Thank you so much, I know your very busy right now, good luck with your upcoming delivery, praying for your safety and baby’s. I can’t wait to see her nursery!!!

Oh I love this! I actually have the same exact glider, crib and overall color scheme. Though yours looks infinitely better than mine! I have been thinking of updating the storage in his room now that he’s a toddler, love the parsons bookshelf but I’m worried about the climbing potential. Is it sturdy enough if they did try to? I mean, I would be running in to take him down, not encouraging it, but man do I have a climb everything in sight boy and now I have to worry if things are safe enough for him!

This has to be my favorite nursery I have EVER seen!

Emily! Love Charlie’s room! My son’s room is the only one that was actually designed in our house too! Haha. I would love to pick up your extra canopy!! 🙂

What a wonderful space. Have you changed out the crib for a toddler bed?
Since this is a baby post I have to tell you how fun it was to see you in a Target ad on Hulu last night….I was watching ‘The Voice’ since I don’t have cable or streaming etc., it was just on my laptop but there you were….to quick but so cute!

sometimes it’s the simplest things, right? your ‘ship-kite’ is like, my total ‘dream boat!’ love it.
and your phrase “cat room?” omgosh … say no more!!!!

This room is really amazing, like really really amazing!! I started to think about how lucky the next buyer of your house is… All three houses I owned had wallpaper, duckborders, etc…and someone gets your animal walls for free, no fair!!

What a special place!

I’ve been wanting the west elm book shelf since I saw them in your living room at your last house.
I was so excited there’s an em_hendo approved less expensive option.

But it clicks thru to west elm again. Can you pretty please tell me where the look for less one is from?

But what about the leather book ends?

I’m so happy you were finally able to blog this room! I was pregnant and designing my own nursery when Charlie was this age and dying to see it. I spied the glider in one of your post and got the exact one. It’s the most beautiful and comfortable glider out there and I still love it 15 months later. So thank you for that! Our recent dilemma is non-hideous toy storage for our living room. We live in an older house that has one large living room and mostly play in there. Now that she’s got toddler toys that… Read more »

I love this room so, so much! Amazing work, thanks for sharing! Has the changing tray (or stray pee – ha!) damaged your dresser top at all?

Love this nursery & yes, it is great to see where you actually store the nappies & wipes!
Wishing you all the best for the impending birth xx

Oh my goodness room is so cute! You seriously did an amazing job!

I spy the very awesome striped pillow I got at your studio sale ! It’s now living happily on our blue sofa 🙂

I live in LA and would totally come pick up some hanging triangles if they’re still available!

That is such a fun nursery!

I agree $80 is a lot for a changing tray like that. My husband made ours for our son’s nursery. It’s rustic/retro travel themed.

Really that wallpaper is wonderful 🙂 it’s a great room all around!

best wishes and safe journey to you and baby girl this week. thinking of you, and thanking you for all the color, humor, hard work and positivity you bring to life. party on. <3

I saw a picture of your nursery a few months ago on elements of design blog?

Thanks, a lot! You said this was in the SEPTEMBER issue so I found a backissue to order on eBay, but it’s not in there. Looking back at the photo, I can see now that it’s in the OCTOBER issue. ? Boo.

How to Design a Room 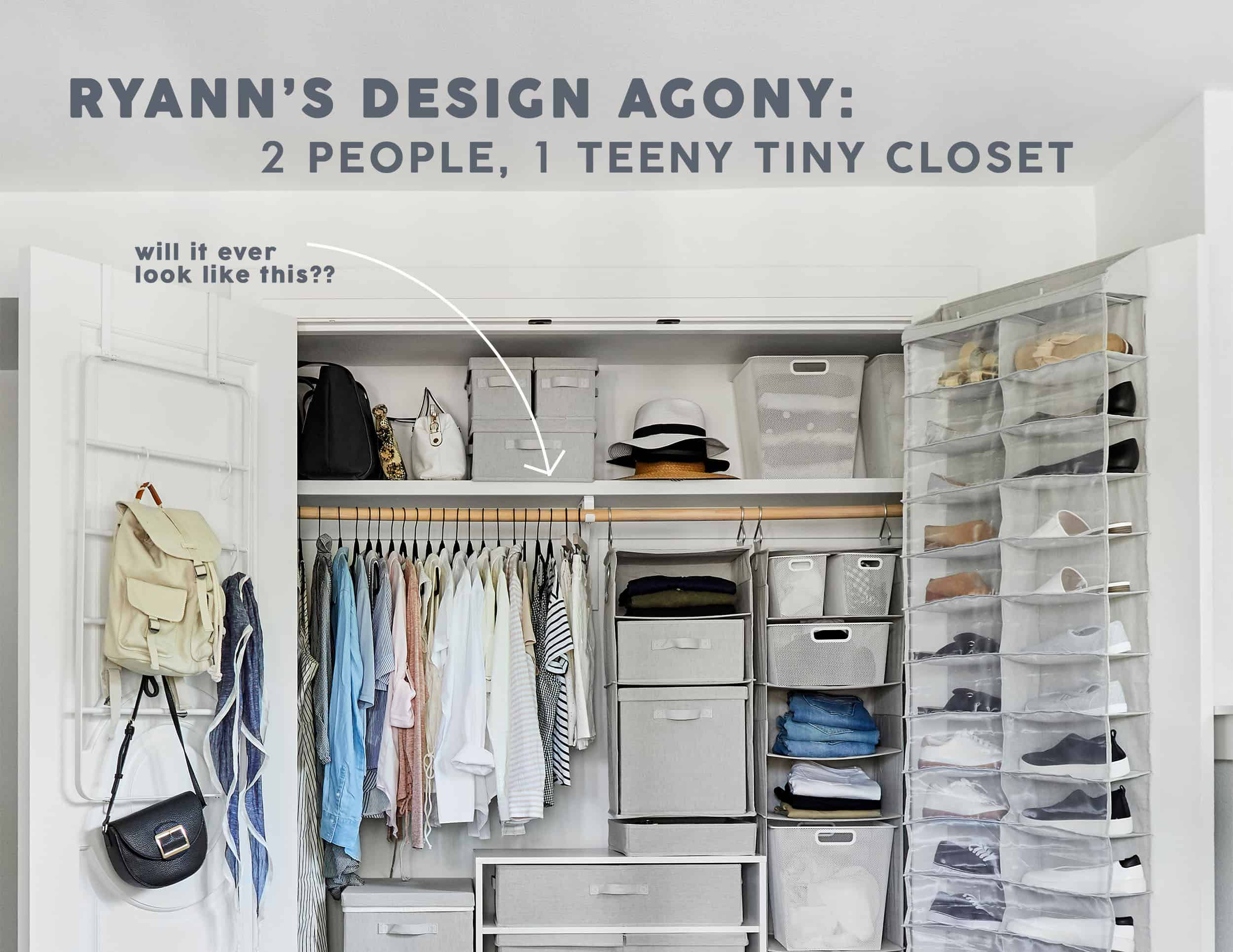 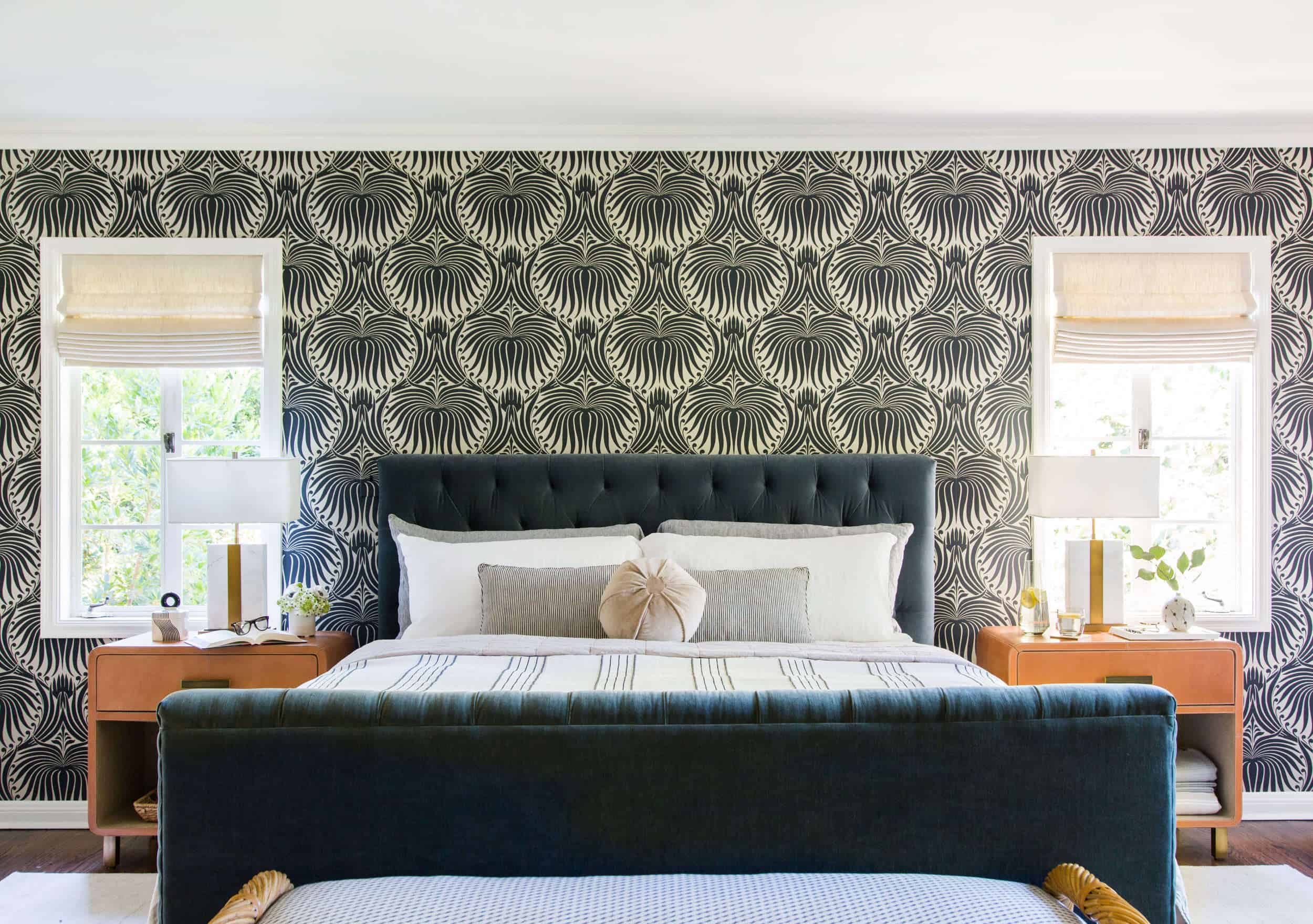 The Right Way To Make Your Bed – Our 5 Best Formulas 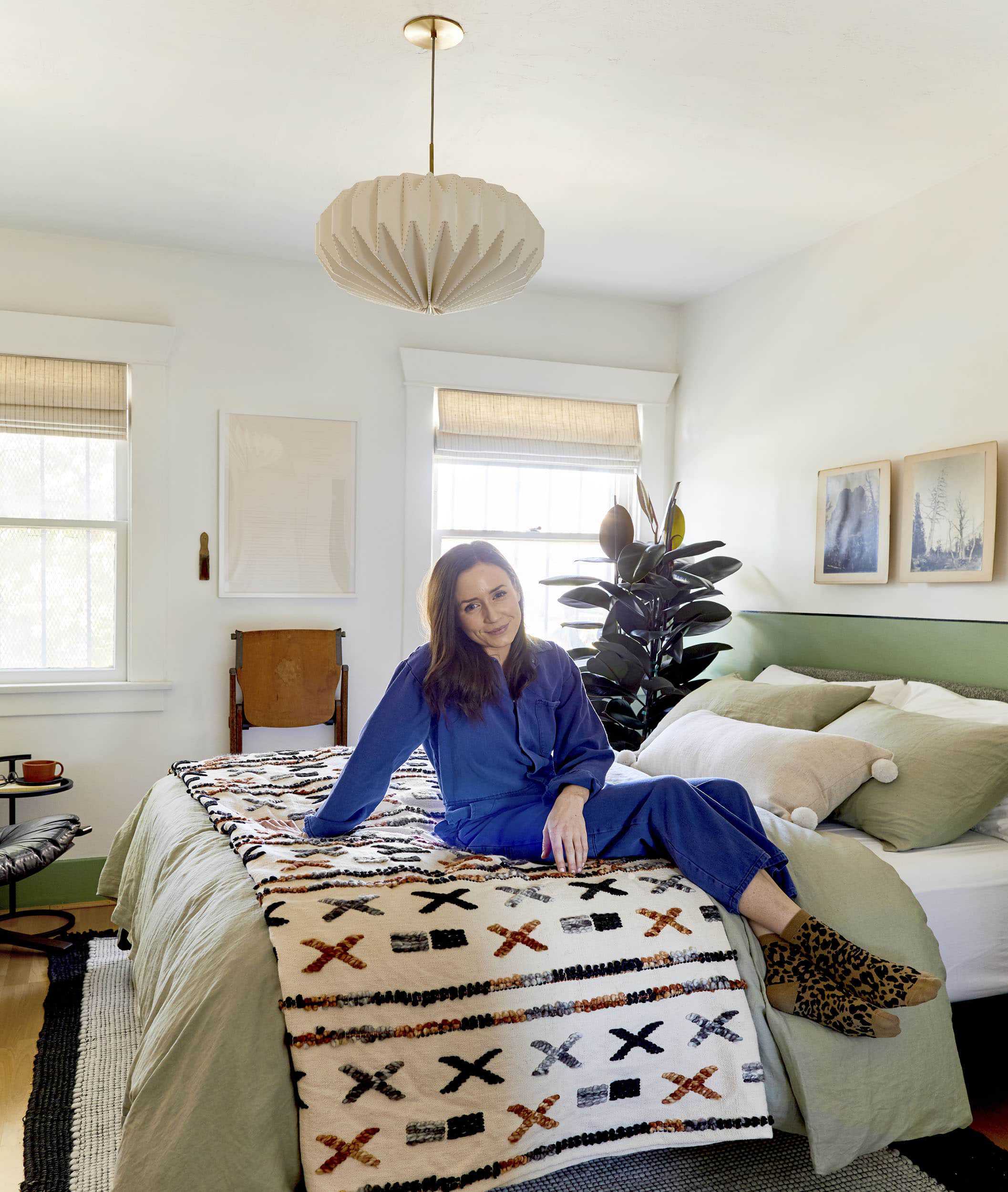 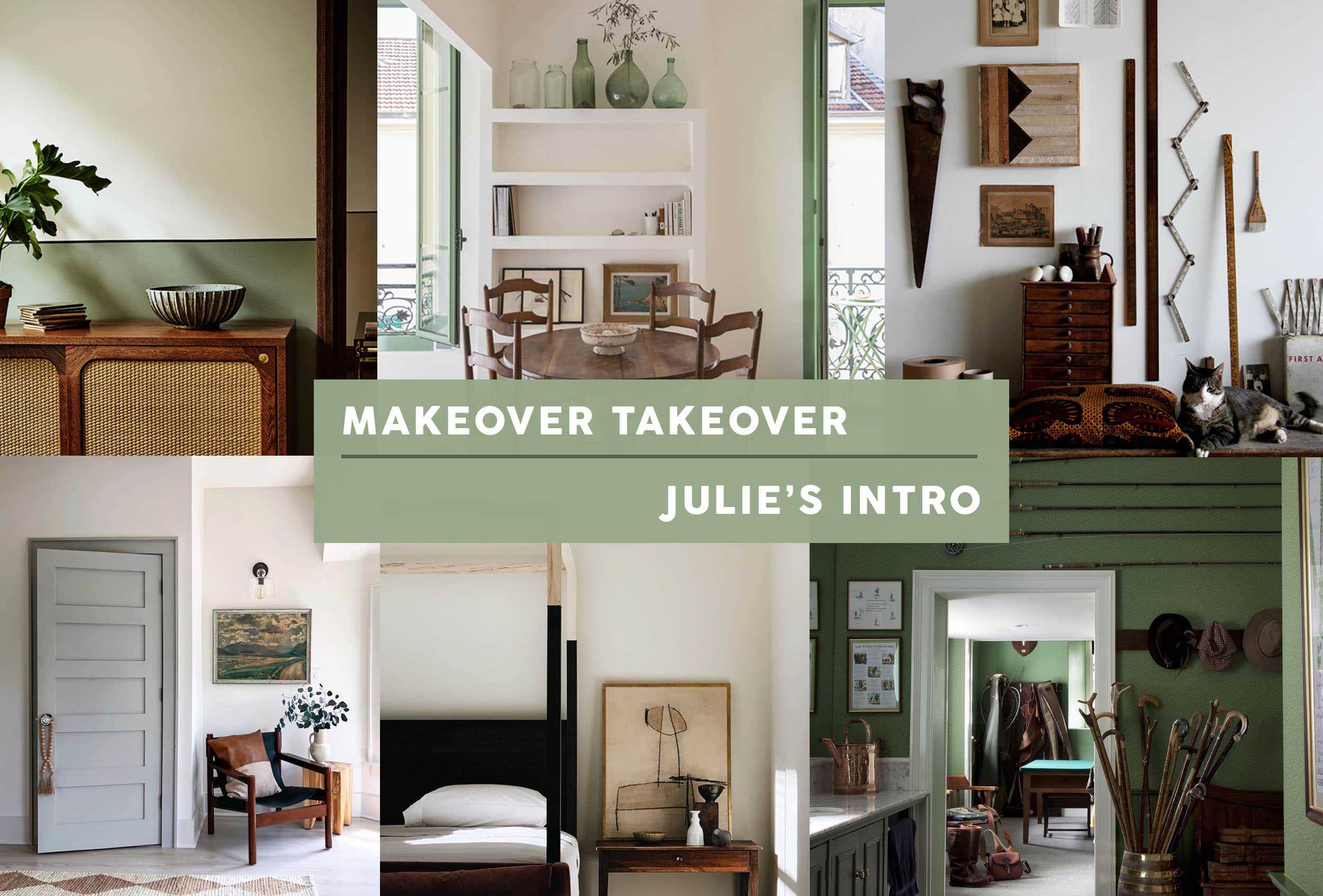 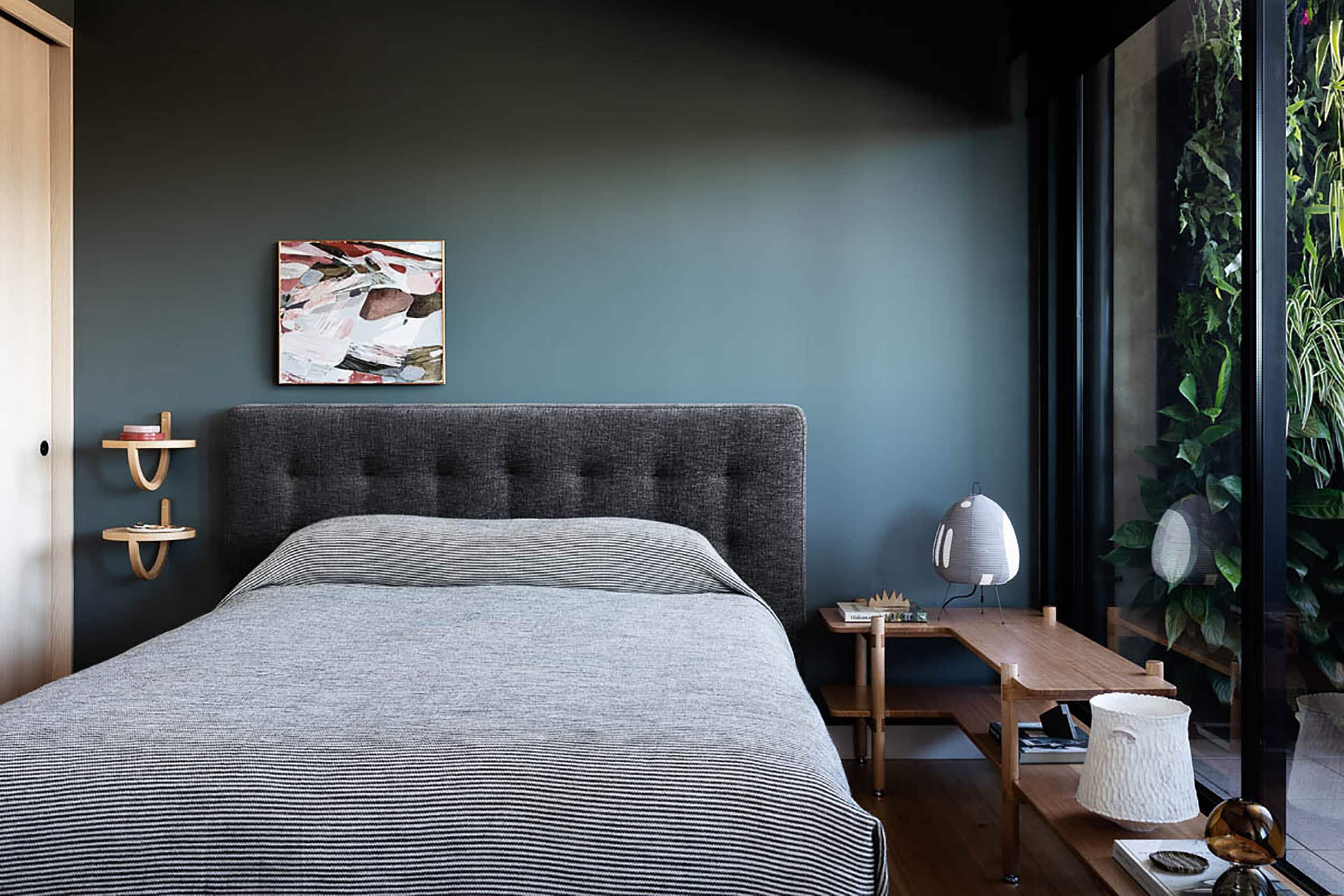 No, Your Nightstands Don’t Have to Match (& Here’s How to Do It Like a Designer)